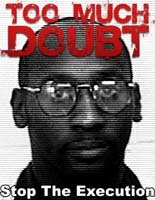 Despite widespread doubt, the Georgia Board of Pardons and Paroles upheld the decision to execute Troy Davis this Wednesday.Still, Troy has refused to have a “last meal.” He has faith his life will be spared.In the past, his tremendous faith has been rewarded. The last time Troy faced execution, in 2008, the warden brought in what was to be his last meal. But Troy refused to eat. Looking the prison staff in their eyes, he explained this meal would not be his last. He was vindicated when he received a last minute stay.

Guards still remember this as a haunting moment, one rooted in Troy’s deep faith. Still, there is every sign the state of Georgia intends to execute Troy this time–despite calls for them to stop by everyone from the former head of the FBI, William Sessions, to former US President Jimmy Carter. Troy has prepared himself, and to the extent anyone can, his family, for either outcome. As he has said many times “They can take my body but not my spirit, because I have given my spirit to God.”Thus, even as we continue to call on the Board of Pardons and Parole and Savannah District Attorney Larry Chisolm to reconsider, we must be prepared for either outcome too. 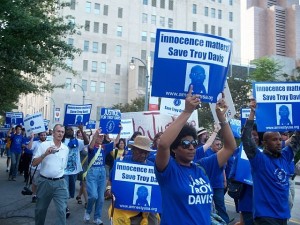 Please stand with Troy and his family. Join NAACP activists around the country in an evening of solidarity, prayer, and fasting on Wednesday, September 21st.Ask friends to meet up. Ask your family to fast Wednesday evening in solidarity with Troy’s family and use the dinner hour to talk.
Ask your faith community, if they already have a Wednesday night fellowship planned, to make time for conversation about Troy’s scheduled execution. However you do it, please mark the 7 o’clock hour on that evening–the time of Troy’s scheduled execution–as a moment to reflect on Troy’s experience, to offer prayers for his family and that of Officer MacPhail, and to talk about what we can each do to ensure our nation never does this again.

This is a moment to rededicate ourselves to the struggle to end the death penalty and otherwise fix our nation’s broken justice system.To honor Troy’s courage, and rededicate ourselves to the cause of justice in America, NAACP activists are asked to fast Wednesday evening. While moments like this test the limits of our understanding, we do know the world will remember Troy’s name, and the movement against the death penalty will grow. People who thought they supported capital punishment yesterday will realize they cannot today. Because people who thought they could stand on the sidelines will realize they no longer can.

As the scorn of the world grows and the doubts within our nation grow as well, we will increasingly realize this barbarous tradition–practiced by virtually no other western nation–is inconsistent with our self image as a fair and freedom-loving society. should the execution actually occur this time, Troy’s life and the fight to save it will not have been in vain – we will move forward with more allies and an even wider consensus about the urgency of our cause. Please join your fellow activists Wednesday for an evening of prayers, fasting, reflection, and recommitment to the struggle for justice.With prayers and determination,Benjamin Todd Jealous, President and CEO, NAACP. Click here to read more about Troy Davis.

“The struggle for justice doesn’t end with me. This struggle is for all the Troy Davises who came before me and all the ones who will come after me.
I’m in good spirits and I’m prayerful and at peace.
But I will not stop fighting until I’ve taken my last breath.”
Troy Davis