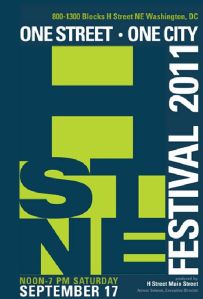 The night before I co wash mini Me’s hair with conditioner, coconut milk, and honey. After co washing and moisturizing I completed a “faux hauk” look by using Butter N’ Jelly styling aid and applied 3 pony puffs along the center of the head with a 3 strand twist out in the front.

Charlene accented the faux hawk with a braid that wrapped through out the head-still spot lighting the natural hair style. 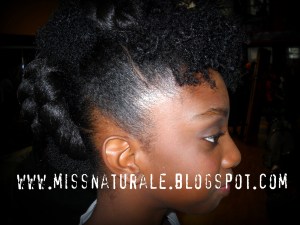 Milaki Conner applied the makeup ( the lighting wasn’t good in these pictures, however the make up was FLAWLESS and age appropriate).

Next up was the show!!!!! Mini Me ROCKED!!!!!! It had begun to rain, the runway was wet. She adjusted, kept the beat when the music changed mid walk, and gave the photographer what they wanted at the end of that runway. She RIPPED THAT RUNWAY!!!!!! I was very proud of her and was gleaming from ear to ear.. She almost made me wanna adorn my stilettos and rock out for old time sake ( lol..lol). 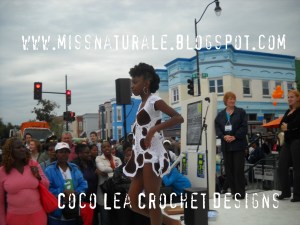 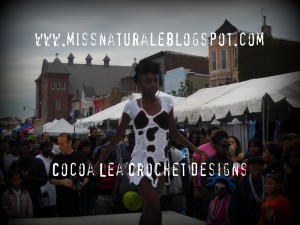 Mini Me met Paul Wharton ( model coach and member of the Dc Housewives Cast). He gave me lots of advice, advised me to keep mini me in the modeling game because she is a natural. He also said he could feel her confidence and she was a natural beauty ( yeah!).

We also had a opportunity to network with April Watts ( a multi-talented performer best known to audiences for her work hosting television and radio programs in the Washington, DC metropolitan market including her current gig on Magic 95.9 (radio) and WHW Rock ( indie talent showcase Produced and Hosted by April Watts) 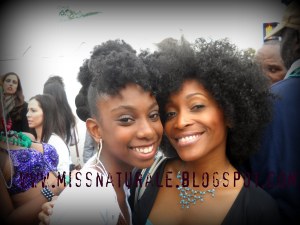 I didn’t get an opportunity to capture additional photos. Along with being the mom-anger I was also assisting behind the scenes. There were some fierce models rippin the runway- BUT Mini Me was the ONLY CHILD/TEEN NATURAL!!!!! I love the fact that despite all the straight hair, weaves, and wigs she didn’t feel pressured to “look” like them. She said to me “Mommy, can you do my hair and make it big? ” I admire my munchkin for staying true to herself and rocking HER WAY! I love…love…love.. that my mini me looks up to me and I ‘m her role model. She is so much like me ( her smile, her personality, her confidence) – everyone that meet her in person always say ” she really is a mini you!”

Mini me brought along a friend for moral support ( I ended up putting her to work..lol..lol..). After the show we walked up and down H street looking at all the vendors, and the food that was available for purchase. Despite the rain and the cool weather it was a great day!!!!

S/N: With the festival being held in DC I was expecting to hear Go-Go the entire day-that wasn’t the case- there was a DJ there ROCKING HOUSE ( my 1st love).. WHEW it was giving me FEVER!!!!! Almost made me think I was 21 again partying at Nell’s.

Disclaimer: These images may not be reproduced, copied, transmitted or manipulated without the written permission of Mz. Sixx. Use of any image as the basis for another photographic concept or illustration (digital, artist rendering or alike) is a violation of the United States and International Copyright laws. All images are copyrighted © 2011 – Au’Naturale by Mz. Sixx.

There was an error retrieving images from Instagram. An attempt will be remade in a few minutes.