that was very hard for me to say 😦

Face Fully Made Up w/ Dermablend

Some of you are familiar with my skin troubles that I’d been experiencing for over a year. I would try different things, some worked for a while, and some never worked at all. Growing more and more frustrated and embarrassed by my skin, I went to get my prescription re filled for a facial cream my dermatologist had prescribed to me. Hoping that would be my saving grace.

Partial Makeup
As I began any normal day, I went to CVS hoping to come out with a tube of some magical cream that would clear up my adult acne (the diagnose I’d previously been given). The pharmacist informed me that my prescription required authorization. When he called to get authorization- the dr. instructed him not to fill it and have me come in his office. I thought to my self- “great, he gonna give me the sho nuff good stuff to clear this up”. I made an appointment to see the doctor the next day- never mentioning it to my husband or friends- I wasn’t the least bit concerned. I went to work late so that I could see the doctor and drop my prescription off as soon as possible.

The doctor enter the room and starred straight at my nose [insert gas face right here].

Naked Face- No Makeup- Its hard to see in the pics, but I also have a red bumpy rash
As soon as I noticed the way he was looking at me, I got scared. He began to “drill” me about what been happening to my face. He then said that my face had gotten worse since my last visit and he was concerned. CONCERNED– did he just say he was CONCERNED??? – I obviously knew my face had gotten worse- what started out as one dark spot on my forehead was now covering my nose and had spread to my checks. He did a biopsy on my nose area and took blood. I’m really anxious and nervous at this point. I’d only known people to need a biopsy when they thought they had cancer. That “c” word scares me to no end. I silently cried many days and nights, anxiously awaiting the results.
The nurse called me and asked that I come to the office as soon as possible. My first word was “WHY” what’s the problem?? She wouldn’t say. She only would say that we need to discuss treatment with you- TREATMENT??? TREATMENT FOR WHAT??? Now, I’m shouting and crying at the same time. She still wouldn’t reveal anything to me and advised that I come to the office as soon as possible. I’m sure anyone else would have ran to the office, I didn’t. I did not want to hear that I had cancer. Nope, I was convincing myself and saying Hail Mary as many times as I could over the course of two days. The doctor called me wanting to know why hadn’t I come to the office and when was I coming. (Sigh), I was being a real bitch- I just out right said. LOOK, I’M NOT PAYING YOU A CO PAYMENT FOR YOU TO TELL ME I HAVE CANCER- YOU CAN TELL ME THAT OVER THE PHONE! He said “who told you, you have cancer”? You don’t have cancer- but I need you to come in the office. I’m sure he said more, but I blanked out of the conversation when he said I didn’t have cancer. So I took my lunch break and went by the office. I was calm, cool, and collected- because I thought I had just dodged a death sentence.

As soon as he walked in, I began to apologize for being such a baby and bitch at the same time. He accepted my apology, and sat down, and asked me if I was familiar with Lupus. Lupus?? Ummm……..Not really- why, I asked. He hands me a bunch of pamphlets and goes on to explain to me that I have Lupus. Lupus is a chronic autoimmune disorder that can affect virtually any organ of the body. In lupus, the body’s immune system, which normally functions to protect against foreign invaders, becomes hyperactive, forming antibodies that attack normal tissues and organs, including the skin, joints, kidneys, brain, heart, lungs, and blood. Lupus is characterized by periods of illness, called flares, and periods of wellness, or remission. I have Discoid lupus erythematosus, which mainly affects the skin. The symptoms of this form of lupus include a rash on the face, scalp, or elsewhere. The rash may last for days or years, and can recur.

UPDATE: Initially I was diagnosed with Discord Lupus, I have since been diagnosed with Systemic Lupus. I now see Dr. Michele Petri  affliated with John Hopkins Hospital in Baltimore, MD. My dermatologist is Dr. Valerie Callender, who has 27 years experience treating individuals with Lupus

I said okkkkkkkkkk, so what I gotta do to get rid of it? He then said, he can treat the symptoms (from flare ups) but there is no cure. WAIT- STOP THE DAMN PRESS- DID YOU SAY NO CURE?? I rose up outta that chair and honestly I was MAD- the kind of mad, where you’re ready to fight. I’m not sure if I was mad at the doctor, myself, or the world, but I was furious, and I felt betrayed! (I know it doesn’t make sense-but that’s how I felt). After 20 minutes of asking multiple questions and answering questions, and FINALLY having a reason for the shortness of breath, the hot flashes, sweating, headaches, fatigue, anemia, gastrointestinal problems, weight gain/lose, insomnia, bouts with depression, and the skin rashes- it was making sense now. I went home and instantly went to the Internet so that I could educate myself on Lupus- 2 days later my brain was fried and I was full of questions. 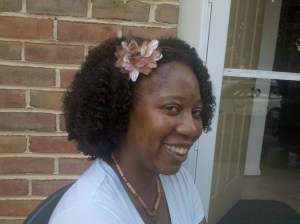 I slowly began to tell my family- starting with my husband, my kids, and my siblings. My niece who is a RN, said to me” I knew it, I was waiting on you to say something”. My sister said, she knew something was wrong because of my skin, but nonetheless I was going to be ok. I’m a fighter and I don’t quit. I’ve been debating whether or not I should tell anyone. Honestly- I was embarrassed. I no longer feel embarrassed or ashamed. I HAVE LUPUS DAMNIT! It’s not the scarlet letter, and I will not allow it to take over my life! I’m surrounding myself with other people who are living with Lupus, and educating myself as much as I can on the disease. My blog will now included my battles and victories as Lupus is now a part of life. I’m not going anywhere ya’ll and I’m determined to whip Lupus A$$
Disclaimer: NONE OF YA’LL BETTER NOT START TREATING ME LIKE I’M SICK, OR WE WILL BE BEEFING!!!!!! Love ya much!!!!!

3 thoughts on “Hello-I’m a Lupie Chick”