Yesterday I spoke to an ex (whom I haven’t spoken to or seen in more than 17 years). He seems so broken dealing with a lot of heath issues (specifically diabetes) and the lost of his immediate family members. He had been dealing with a lot of guilt from situations that occurred during our relationship and had remained in that moment. Listening to him made me realize that we have life choices.  We can live in PEACE or PIECES! I realized that I choose peace while he had chosen pieces. Yes, I know it is very difficult and hurtful to lose all of you immediate family members, and it’s also difficult to live with an illness (the same illness that had taken the lives of his family), BUT you have to choose PEACE. Choose to deal with whatever is before you and GO THROUGH IT (not around it).
I think back on all the test that I’ve had to take to have this testimony I speak about today. I have no shame and no silence.  I survived sexual abuse, domestic violence abuse, the challenges of being a teenage parent, betrayal, mis fortune, financial instability, unemployment, and now fighting for dear life to beat Lupus. I FOUGHT and will CONTINUE to fight EVERYDAY for the rest of my life.  We all have a responsibility to live our best life (whatever that may be). I know that everything that has happened to me happened for a reason to make me realize just how AWESOME I really am. I’m much stronger than I ever knew or imagined I could be. Do I have fear-of course I do.. but I have taken lemons (my fears & life challenges) and turned them into champagne (success)! This is MY LIFE- and whatever the devil has taken from me- HE CAN KEEP IT- BECAUSE MY GOD HAS SOMETHING BETTER FOR ME!!!!! I choose to live in PEACE!
To all of you that read this post- I ask you- how you will live the rest of your life? In PEACE or PIECES????

Until Next Time Fam

The information included on this blog is for educational purposes only. It is not intended nor implied to be a substitute for professional medical advice. The reader should always consult his or her health care provider to determine the appropriateness of the information for their own situation or if they have any questions regarding a medical condition or treatment plan.

WYNETTA SHAMONTA WRIGHT
JAYLIN ARIEL WRIGHT
Wynetta is the loving daughter of Wyvette Wright and Everett L. Tucker; beloved mother of Janiya and the late Jaylin Wright. Also survived by brothers, Damont, Michael, Vernon and MarKeith; grandparents, Maddie and Everett Tucker, Cynthia and Samuel Wright; and a host of other relatives and friends.

Jaylin is the loving daughter of the late Wynetta S. Wright and beloved sister of Janiya. 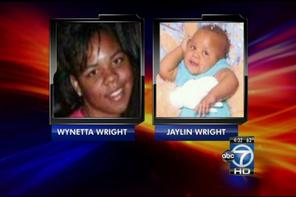 Wynetta Wright, who was found dead Thursday, was killed by a shot in the head. Her 1-year-old daughter Jaylin Wright died of heat exposure inside a car, autopsies of the two bodies have revealed.

Phillips, the father of Jaylin, has been a vice detective with the Metropolitan Police Department since 2003. He worked as a narcotics officer.

Phillips is apparently married to another woman and already has a 12-year-old daughter.
Police claim they have video evidence that, before Phillips shot and killed Wynetta Wright and left her baby girl to die in a hot car, the couple spent seven hours talking at a picnic table.
It was the night before a paternity and child support hearing and friends say Phillips had asked Wright to come to a park to talk just before 11 p.m. last Monday.

Police believe Phillips lured Wright to the woods behind a Hillcrest Heights community center Monday night and killed her. He then left the baby to die strapped in her car seat in 100-degree heat, police believe.

Police say that Wynetta was found lying in Oxon Run Stream Valley Park in the 2300 block of Oxon Run Drive on Thursday. She was pronounced dead at the scene. Shortly thereafter, Jaylin was found abandoned and dead in a vehicle in the 2400 block of Southern Avenue.

“It’s a tragic incident obviously. We would hope that no one would have to endure this type of incident and anybody that’s guilty of it needs to be punished to the fullest extent of the law,” said Lt. Col. Gary Cunningham.

She says Wynetta and the child’s father were scheduled to attend a custody hearing the next day. Wright’s green Saturn SUV was recovered in a parking lot near the intersection of 24th Street SE and Southern Avenue.

Wright had been a member of the Prince George’s Sheriff Explorer program and wanted to become a deputy in the department, a sheriff’s office spokesperson says. She was planning on applying to the academy.

Portions of this post is courtesy of ABC7 News